Are you looking for a detailed listing of cycling classes offered in our Wheat Ridge fitness studio? If so, click here to learn more about this and other class offerings at Vitruvian Fitness!

When you exercise at different intensities, expect different things to be going on in your body. It seems obvious but 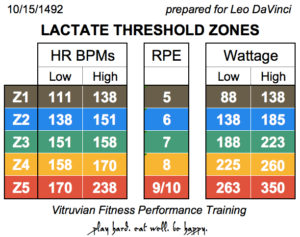 sometimes the terminology is confusing. And when you’re working hard, the last thing you want to hear is a scientific explanation of why your legs, heart, and lungs feel like they’re going to explode. Right? Cycling Training Zones makes it simple.

The first thing you must understand is training zones are not a measure of your performance. They are are an observation of the intensity of your workload. For example, one person’s 140 bpm heart rate does not mean that your 130 bpm is better or worse. The measure of your performance is how many watts can you generate or how many miles per hour you can ride at the same level of intensity. Comparing one person’s heart rate to another is like comparing eye color.

So, let’s break it down. All of this is adapted from the research and training of Dr. Andrew Coggan, PhD.

On our Performance Training System, we use heart rate as the measuring stick for intensity. Power measured in watts is also useful. Watts are not broadcast to the TV screen but it is on your bike’s console. Observing changes in wattage is how you know you’re getting more fit, more powerful, and more awesome. In simple terms, it means you’re going faster with no extra effort.

We’ll list the Training Zones, it’s name, what it feels like on the Rating of Perceived Exertion Scale of 1-10, and how long you would be able to last at a sustained effort at that intensity.

Easy “all day” pace with nowhere to go. Easy spinning or very low level exercise. Too low to induce physiological adaptations. Minimal sensation of leg effort/fatigue. Requires no concentration to maintain pace, and continuous conversation possible. Typically used for active recovery after strenuous training days (or races), between interval efforts, or for socializing.

“All day” pace but with a purpose and a destination. Also known as long slow distance (LSD) training. Sensation of leg effort/fatigue generally low. Concentration generally required to maintain effort only at highest end of range and/or during longer training sessions. Breathing is slightly elevated compared to that in Zone 1, but continuous conversation still possible.

Typical intensity of brisk riding/training. It’s like you’ve got places to go, people to see, but you’re in a hurry to get there. Greater sensation of leg effort/fatigue than at level 2. Requires concentration to maintain, especially at upper end of range, to prevent effort from falling back to level 2. Breathing deeper than level 2. Conversation still possible but somewhat halting.

This is a pace you could sustain for almost an hour but not 1 minute longer. Leg effort/fatigue gradually increasing from low to significant the longer the pace is maintained and becoming unsustainable in the last minutes of the effort. Continuous conversation is difficult at best, due to depth/frequency of breathing. Mentally taxing effort increasing with the duration of effort. Zone 4 efforts are typically performed in training as multiple ‘repeats’, ‘modules’, or ‘blocks’ of 10-30 min duration.

Typical intensity of longer intervals intended to increase VO2max. Strong to severe sensations of leg effort/fatigue, such that completion of more than 30-40 min in total training time (with breaks) is difficult at best. Conversation not possible due to often ‘ragged’ breathing. Should generally be attempted only when adequately recovered from prior training – consecutive days of level 5 work not necessarily desirable even if possible. Note: At this level, the heart rate may not reflect the intensity of this effort due to slowness of heart rate response.

High intensity intervals of between 10 seconds and 3 minutes – designed to increase anaerobic capacity. Measuring intensity using heart rate is generally not useful due to slowness of heart rate response. In other words, you will be unable to continue a 5+ effort before your heart rate registers the intensity. Severe sensation of leg effort/fatigue, and conversation impossible. Very short, very high intensity efforts (e.g., jumps, standing starts, short sprints) that generally place greater stress on musculoskeletal rather than metabolic systems. Power useful as guide, but only in reference to prior similar efforts. Note: Zone 5 is frequently broken into 3 subgroups. For our training purposes, we have Zone 5 and 5+ that combine the subtle differences for simplicity.

Would you like to learn more about our cycling classes in Wheat Ridge, Colorado? If so, get in touch today, and we would be happy to discuss all of the details with you!